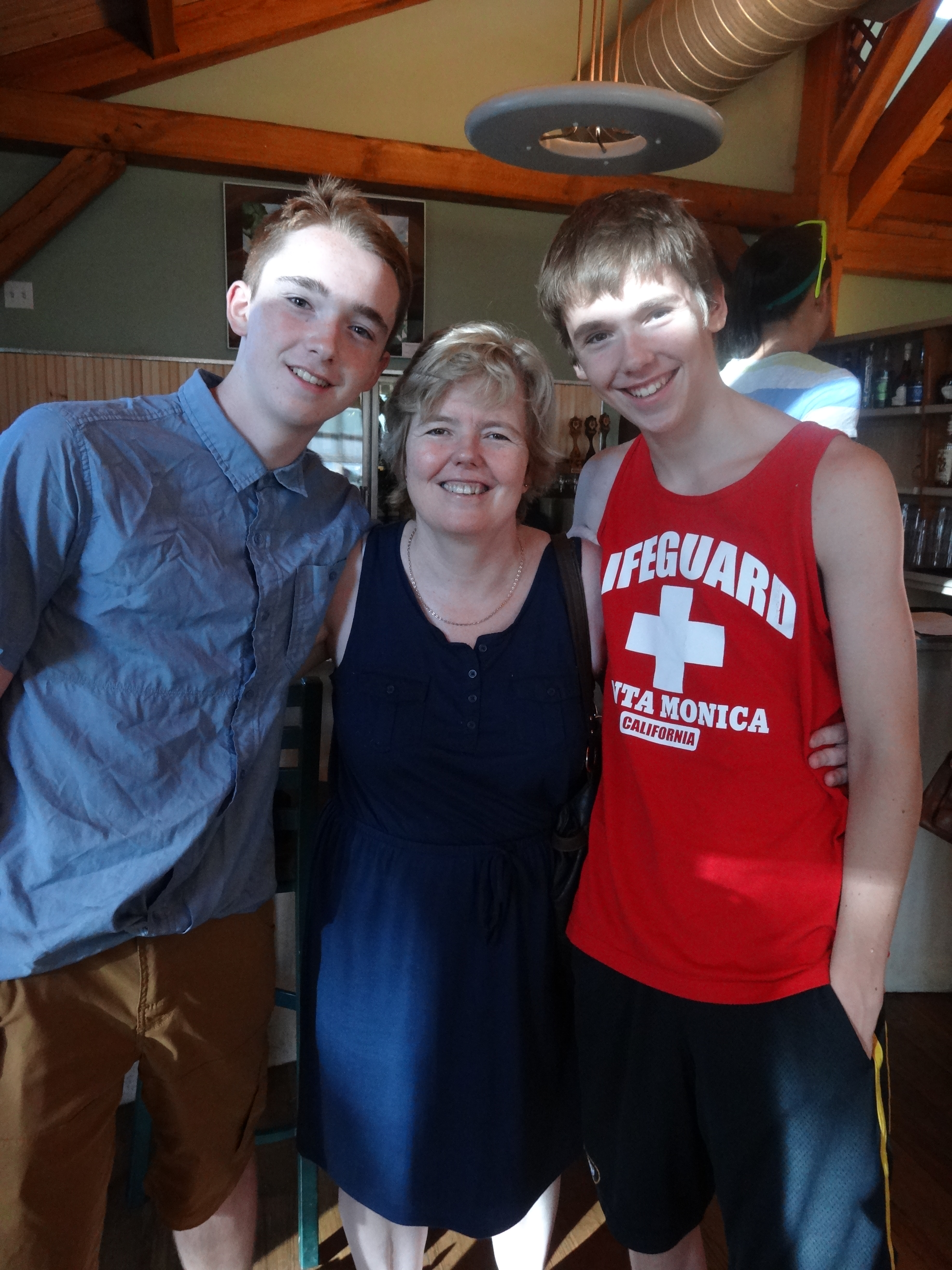 Frances grew up in South Africa and dreamed of being a writer. She attended the University of Cape Town studying philosophy, English, and Greek. Sadly, creative writing classes hadn’t been invented yet, or if they had, they hadn’t reached the tip of Africa. She found literature wonderful to read but difficult to write about. So, she focused on philosophy, earning a BA and an MA. Then she earned a Ph.D at Syracuse University in New York, where she met and married her husband, Daniel. After short stints at Wayne State in Detroit, and Purdue University in West Lafayette, IN, she moved with Daniel to the Pacific Northwest, where she teaches at Western Washington University in Bellingham. In 1999, she gave birth to twin sons, William and Peter, who absorbed most of her time for the next twelve years. On their twelfth birthday, she found she had more time, and returned to her first love, fiction.

When not writing, teaching, or playing with her family, Frances likes to walk, read, play chess (badly) and watch Shakespeare.

Dissertation: An Analysis and Defense of an Ethics of Love

The Power of Logic, 5th edition, with Daniel Howard-Snyder and Ryan Wasserman, McGraw-Hill, 2012.

“Divine Freedom,” European Journal for the Philosophy of Religion, 2017..

The Pearl of Great Price,” International Journal for the Philosophy of Religion,Special issue on Faith, edited by Daniel McCaughn and Rebekah Rice, f2017).

“Degrees of Wrongness,” in Degrees and Dimensions of Rightness: Reflections on Martin Peterson’s Dimensions of Consequentialism for a  special issue of Ethical Theory and Moral Practice.

“’Ought” implies ‘Can,’” The International Encyclopedia of Ethics, 2011.

“The Puzzle of Petitionary Prayer,” European Journal for Philosophy of Religion, 2010, with Daniel Howard-Snyder.

“Christianity and Ethics,” in Michael Murray (ed) Reason for the Hope Within, (Eerdmans, 1999).

“Response to Qizilbash and Carlson on the Rejection of Objective Consequentialism,” Utilitas, 1999.

“How an Unsurpassable Being Can Create a Surpassable World,” with Daniel Howard-Snyder, in Eleonore Stump and Michael Murray (eds) The Big Questions: Philosophy of Religion  (Blackwell, 1998). Originally published in Faith and Philosophy, April 1994.

“The Real Problem of No Best World,” Faith and Philosophy, July 1996, with Daniel Howard-Snyder.

“A New Argument for Consequentialism? A Reply to Sinnott-Armstrong” Analysis, April 1996.

“A Consequentialist Case for Rejecting the Right,” Journal of Philosophical Research, 1993, with Alastair Norcross.

“Is it Less Wrong to Harm the Vulnerable than the Secure?” Journal of Philosophy, December 1992. “Elbow-Room for Consequentialists,” Analysis, October 1992.

Comments on James Sterba on The Problem of Evil, APA Pacific Division, April 2015.

Comments on The Dimensions of Consequentialism by Martin Peterson, Konstanz University, November 2013.

Response to Laurie Paul, “Why Family Planning is Irrational,” Notre Dame, May, 2012.

Response to Jamin Asay’s “How to Express Ontological Commitment in the Vernacular” at the American Philosophical Association meeting in New York City, December, 2009.

Response to Kelly Sorenson’s “The Actual and the Expected,” to be presented at the American Philosophical Association in Chicago in February, 2009.

Comments on Robert Audi’s “Ethics of Love and Love of Others,” at the Pacific Division Meeting of the American Philosophical Association, Seattle, April 2002.

“Jonathan Bennett on Doing and Allowing,” symposium paper at the Pacific Division Meeting of the American Philosophical Association, March 1997.

“What Gettier Did Not Teach Us,” with Daniel Howard-Snyder, Central Division Meeting of the American Philosophical Association, April 1996.

“Can Love, as an Affection, Be Commanded?” Society of Christian Philosophers, LaVerne, January 1995.

“Why Consequentialism is not a Theory of the Right,” Eastern Division Meeting of the American Philosophical Association, December 1993, with Alastair Norcross.

“How an Unsurpassable Being Can Create a Surpassable World,” Pacific Division meeting of the American Philosophical Association, March 1993, with Daniel Howard-Snyder.

“On the Line Between Deontology and Consequentialism,” Wayne State University, November 1991, and Purdue University, January 1992.

“Mill on Utilitarianism and an Ethics of Love,” University of Iowa, January 1991, and Wayne State University, February 1991.

“Love and Sanctions,” Central Division meeting of the Society of Christian Philosophers, October 1990.

“The Christian Theodicist’s Appeal to Love,” Eastern Division meeting of the Society of Christian Philosophers, February 1990, with Daniel Howard-Snyder.

Seminar on ethics and fiction

Seminar on our ethical obligations to future generations

Seminar on consequentialism and deontology

Seminar on the philosophy of literature

Ethical Theory I and II

Metaphysics I and II

Ethics from Hume to Ross

Service To the University

August 2008   I acted as an outside member of dissertation committee for Fiona Woollard at the University of Reading in August 2008.

To the Philosophy Department

To the Community (in a professional capacity)

Summers 2014-2016  Participant in the Nature and Value of Faith Project, based at Baylor University and funded by The Templeton Foundation.